Google Inc. is set to introduce its own instant messaging system 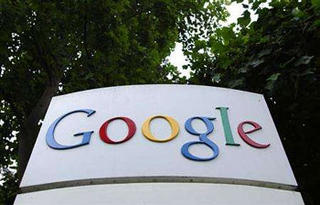 Google Inc. is set to introduce its own instant messaging system, the Los Angeles Times reported on Tuesday, marking the expansion by the Web search leader into text and also voice communications.The logo of Google Inc. is seen outside their headquarters building in Mountain View, California in the August 18, 2004 file photo. REUTERS/Clay McLachlan

SAN FRANCISCO (Reuters) – Google Inc. is set to introduce its own instant messaging system, the Los Angeles Times reported on Tuesday, marking the expansion by the Web search leader into text and also voice communications.

Citing unnamed sources “familiar with the service,” the Los Angeles Times said that Google’s Instant Messaging program would be called Google Talk and could be launched as early as Wednesday.

Google Talk goes beyond text-based instant messaging using a computer keyboard to let users hold voice conversations with other computer users, the newspaper quoted a source as saying.
A Google spokeswoman declined to comment on the company’s product plans.
If confirmed, the combined computer text and voice-calling service would put Google in competition with a similar service pioneered by Skype, which has attracted tens of millions of users, especially in Europe, to its own service.

Separately, independent journalist Om Malik on his blog at http://gigaom.com
pointed to technical clues that suggest Google is preparing to run an instant messaging service based on an open-source system known as Jabber.

“This is the worst possible news for someone like Skype, because now they will be up against not two but three giants who want to offer a pale-version of Skype,” he wrote. Earlier this week, Google said it was branching out beyond pure search to help users manage e-mail, instant messages, news headlines and music. It introduced a new service called the Google Sidebar, a stand-alone software program that sits on a user’s desktop and provides “live” information updates.

Over the past year or so, the company has expanded into e-mail, online maps, personalized news and more.

Google’s moves take it beyond its roots in Web search and closer to becoming a broad-based Internet media company. With instant messaging, Google would be breaking into a market in which its major competitors boast tens of millions of subscribers to their established instant messaging services.

America Online, with its AIM and ICQ brands, counts more than 40 million IM users in the United States alone. Yahoo has around 20 million and Microsoft’s MSN Messenger numbers some 14 million users, according to recent comScore Media Metrix data.