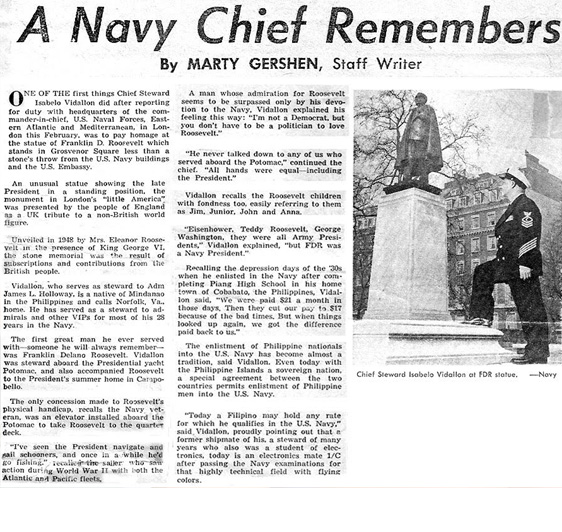 Growing up as a kid in the 60’s in Virginia Beach I found great solace in the stories my mother shared about my father’s forward-thinking and attitude about race and success. I took these stories to heart and wanted to share one such story told in the article below.

ONE OF THE first things Chief Steward Isabelo Vidallon did after reporting for duty with headquarters of the commander-in-chief, U.S. Naval Forces, Eastern Atlantic, and the Mediterranean, in London this February, was to pay homage at the statue of Franklin D. Roosevelt which stands in Grosvenor Square less than a stone’s throw from the U.S. Navy buildings and the U.S. Embassy.

An unusual statue showing the late President in a standing- position, the monument in London’s “little America” Was presented by the people of England as a UK tribute to a non-British world figure.

Unveiled in 1948 by Mrs. Eleanor Roosevelt in the presence of King George VI, the stone memorial was the result of subscriptions and contributions from the British people.

Vidallon, who serves as steward to Adm. James L. Holloway, is a native of Mindanao in the Philippines and calls Norfolk, Va., home. He has served as a steward to admirals and other VIPs for most of his 28 years in the Navy.

The first great man he ever served with–someone he will always remember– was Franklin Delano Roosevelt. Vidallon was a steward aboard the Presidential yacht Potomac, and also accompanied Roosevelt to the President’s summer home in Campobello.

The only concession made to Roosevelt’s physical handicap, recalls the Navy veteran, was an elevator installed aboard the Potomac to take Roosevelt to the quarter deck.

“I’ve seen the President navigate and sail schooners, and once in a while he’d go fishing”, recalled the sailor who saw action during World War II with both the Atlantic and Pacific fleets.

A man whose admiration for Roosevelt seems to be surpassed only by his devotion to the Navy, Vidallon explained his feeling this way: “I’m not a Democrat, but you don’t have to be a politician to love Roosevelt.”

“He never talked down to any of us who served aboard the Potomac,” continued the chief. “All hands were equal including the President.”

Vidallon recalls the Roosevelt children with fondness too, easily referring to them as Jim, Junior, John, and Anna.

“Eisenhower, Teddy Roosevelt, George Washington, they were all Army Presidents,”
Vidallon explained, “but FDR was a Navy President.”

Recalling the depression days of the ’30s when he enlisted in the Navy after completing Piang High School in his home of Cotabato City,‘the Philippines, Vidallon said, “We were paid $21 a month in those days. Then they cut our pay to $17 because of the bad times. But when things looked up again, we got the difference paid back to us.”

“Today a Filipino may hold any rate for which he qualifies in the U.S. Navy,” said Vidallon, proudly pointing out that a- former shipmate of his, a steward of many years who also was a student of electronics, today is an electronics mate 1/C after passing the Navy examinations for that highly technical field with flying colors. 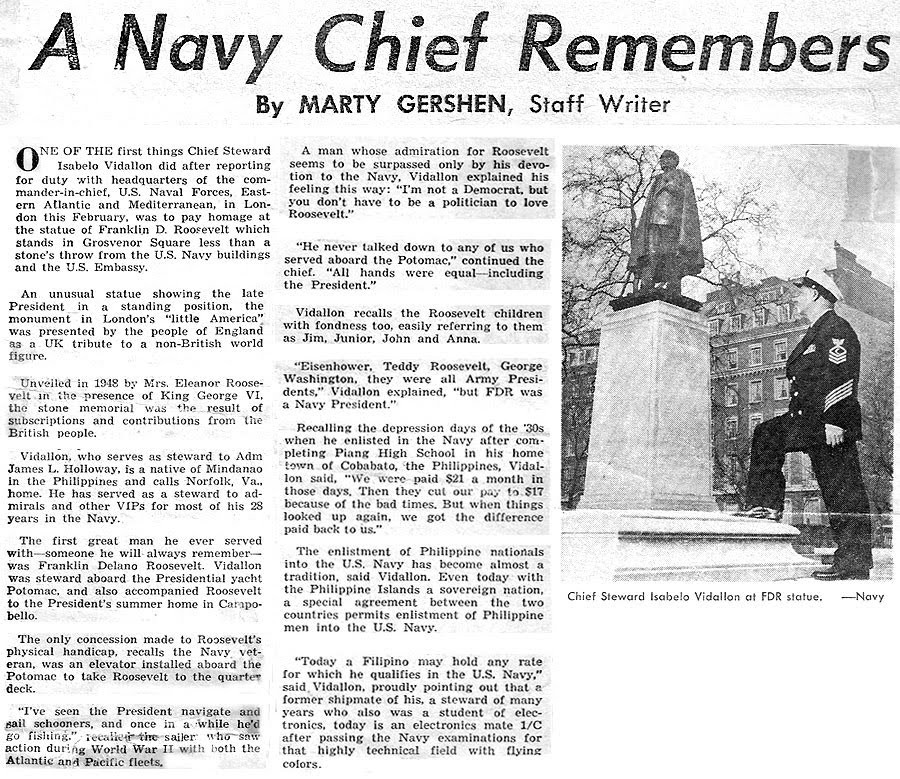