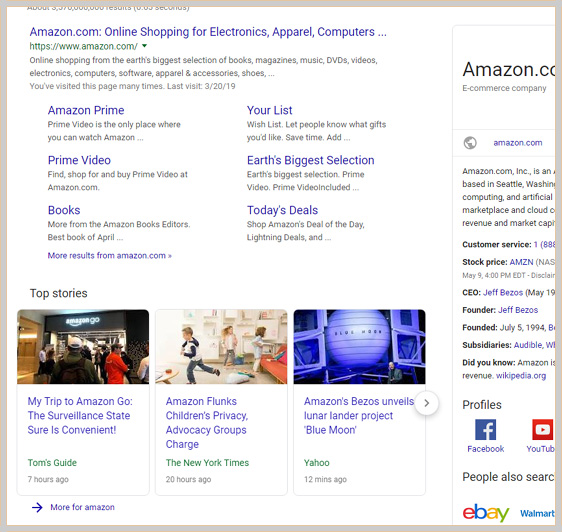 Barry noted yesterday that Amazon’s A9 was no longer carrying Google results. More important, this means that Amazon itself no longer carries Google’s search results — and in particular, Google’s paid listings.

Google and Amazon partnered back in 2003 for Amazon to offer Google searches on the Amazon site. Google ads also were displayed there. I’m pretty sure at one point, the Google logo was on Amazon’s home page, along with a search box. Unfortunately, the Internet Archive simply serves up pages from 2000 no matter what links I try from the years 2003 through 2005 to check on this.

Anyway, these days, there’s a small A9 Web Search box in the upper right-hand corner of the Amazon site. Until last week, that box brought back A9 results that were powered by Google. Now they are powered by Microsoft’s Windows Live Search.
Few people use A9 — but many more use Amazon. How many did web searches at Amazon is unclear, but in either place, they are no longer seeing the paid listings that Google also used to provide.

In addition, I’m also pretty certain that an ordinary Amazon search (which lots and lots of people do) used to bring up Google paid listings as part of Amazon search results. Today, I don’t see these at all. Over at Threadwatch, others report not seeing these either.
MSN syndicates Search to Amazon from the Seattle Post-Intelligencer has more on the new Amazon-Microsoft agreement. The issue of who is providing paid listings isn’t covered, but since the Amazon-Google agreement wasn’t renewed, I’d assume these are to come from Microsoft.

Amazon Search Finds Microsoft from the Washington Post also has some details on the move, including the inspiring answer to whether Amazon felt Microsoft was providing better search results: “It will be up to users to try that out.” So more a business move than a relevancy issue, fair to say 🙂
Udi Manber Leaves A9 to Join Google from us earlier covers A9 losing its first CEO Udi Manber to Google in February.